all these people look the same
Click to expand...

How true. That was part of what the late 1960s was about. Pictures showing (not all) hippies of the 1960s show them (us?) to be relatively demure (when dressed) relative to the norms out on the street today.
C

all these people look the same
Click to expand...

How true. That was part of what the late 1960s was about. Pictures showing (not all) hippies of the 1960s show them (us?) to be relatively demure (when dressed) relative to the norms out on the street today.
Click to expand...

There is a picture I can post of a Vietnam war protest from the local college. Many of the young men are wearing three piece suits.

Beware of showroom sales-fever reasoning: i.e., "for $20 . . ." Once you're home, how little you paid is forgotten; how good you look in it is all that matters.
X

Please post it, Crazy. I think many of the photographs from the early civil rights and Berkeley Free Speech movement will reveal Madras shirts and butch cuts.

I put the blame for deterorating dress not on the hippie movement, but later, when, first, students started wearing numbered football jerseys on the street. The next step was shirts that read, "Property of (ie.) University of Michigan Athletic Department." From there some wiseguy thought it was funny to run with the idea and print 'Property of San Qunton Prison."

The genie was out of the bottle, creativy and the artistic mind were given full license, and greed and stupity began to play their appropriate roles.
H

John O'Hara, writer. The first photo is with his wife and is dated "circa 1938".

DD, well done. O' Hara remains one of my heroes for lots of reasons, but damn did he have style! I've spoken highly of Paul Mellon, but I'm close to suggesting that O' Hara be nominated as All-Time Trad King (ATTK). A true-to-life Trad Dandy. A Trandy.

More O'Hara...some nice photos in his office...finally, a photo which demonstrates his strong Anglophilia (at least sartorially).

Leanings toward Anglophilia, to be sure. But was he ever seen in anything but a button down-sack coat combo? That third photo of him "puffing away" is a gem. Many thanks.

Hardly ever smiled. A pleasantly bored curmudgeonism. What a guy. Would that we dared to imitate his approach toward life.

I don't know, Harris, I don't share the perspective for O'Hara. He certain wrote well about an era and a segment of NE society, but from what I know about him he was frustrated with his background and drank himself to death. Wasn't he rejected socially by the people who were his subject? If you are talking about writers from the '50s I think Auchincloss or Cheever more from that segment.

Harris, I knew you'd like the O'Hara photos. I love the last one; very 'country gent'.

daltx: could you please post your photo of Tucker here, please? It's a good photo and I think would be appreciated as a superb addition to this thread. (I still think the shirt is peach, though, mainly because I doubt two separate photos would be incorrectly exposed...some of our senior trads here can weight in! )

How about Dick (or Richard) Thornburgh?
D

Here's the photo of Tucker you asked for. After looking at the shirt again, I am not convinced that I was right in saying it was pink. I am not convinced I was wrong yet either but that could change. If anyone knows where to get a belt like he is wearing I'd appreciate that information. Enjoy. 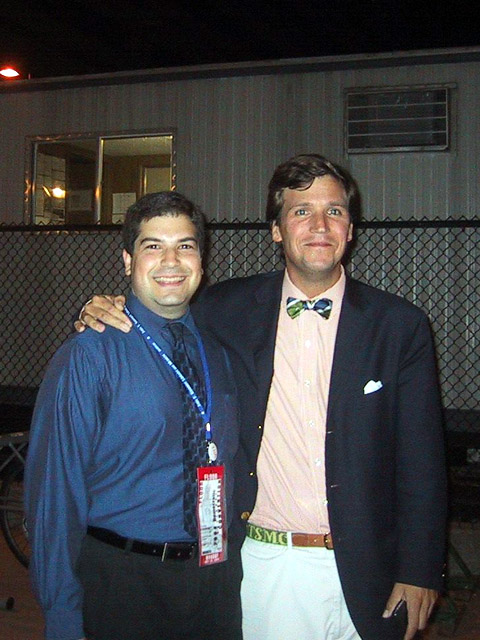 Has anyone noticed that the youngest person shown on this thread is in their late-thirties (Tucker Carlson)?

Thanks for posting, daltx. You're right, that belt is nice...what do the letters stand for?

Wonderfully detailed photos of Tucker; note the amazing old Weejuns. All he needs is a buttondown shirt...

I believe the letters are his initials. There are also several good pictures out there of Tucker wearing tweed if anyone has the interest to find them.

Also, in looking for those pictures originally, I came across an article that mentioned Tucker was chosen by Esquire as one of the 10 best dressed men of 2004. When he was asked about what he wore his response, to me, seemed to somewhat accurately describe the Trad mindset. He said "I've been wearing the same thing since I was 13. If you always wear the same thing every 20 years or so it will be in style."

Lincoln Chafee, US Senator (R) for Rhode Island, who replaced his father John.

Although somewhat trad, Chafee leaves much to be desired as far as a senator is concerned. I can say that without feeling as though I am bringing politics into the mix, as Chafee is not highly thought of by either side of the aisle, so nobody here should be offended (unless of course Chafee himself is a reader, in which case I only partially apologize). From what I can tell, he does not have many principles on which he stands, unlike a true trad. If only he could be more like some of the late trad politicians.

Sen. Chafee's hairstyle strikes me as shockingly un-Trad. Anti-Trad, even. I would suggest for starters he visit the same excellent barber who maintains Archibald Cox's hair (pictured at the beginning of this thread). If it takes he can graduate to a more O'Hara-esque style.
W

His hair doesn't matter. He's establishment, can get away with it. The hybrid he drives with the dented door, well, that's another story...

I saw an article on the internet yesterday about George HW Bush's recent trip to Nantucket. They said he purchased 6 pairs of nantucket red's from Murray's. Good to know the trad inside him is not completely dead.
H

Chafee appears to represent a breed of Trad that many among us tend to like/prefer: Frumpy or I-really-don't-give-a-damn-it's-just-what-I-found-in-my-Dad's-closet Trad. The big, fat tie knots and quasi mullet: nice!