I definitely got a massive grin when I opened the package, it weighs a solid 7 lbs.

Will definitely post about the process as I go on.
F

delicious_scent said:
I got my tweed fabric finally. 4m is a lot more than I expected. I had to unravel it all and take a picture. I couldn't get the entire length in! 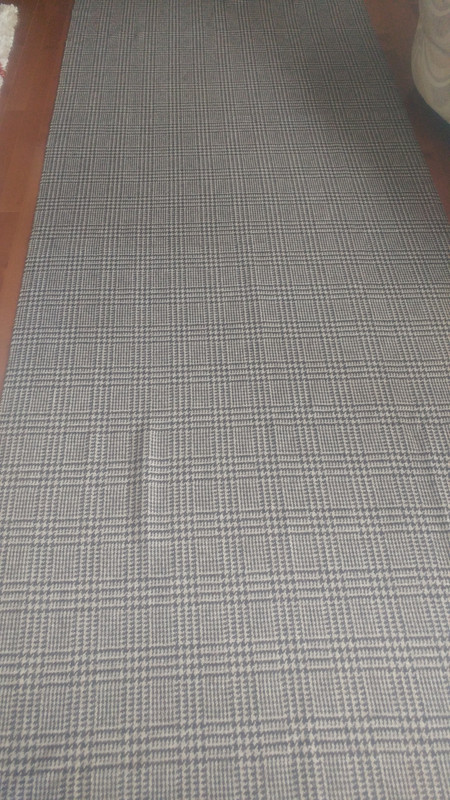 The hand feel is what you'd expect for tweed: very hairy and scratchy, spongey and stretchy, but also seriously THICK. I'd put this at 24oz for weight I'd say. I don't know how conversions work, but it was listed at 720g.
Click to expand...

FiscalDean said:
That would be 25.4 oz. What is the width? It looks to be less than the standard 60".
Click to expand...

Premium Member
Makes you wonder. Once Brexit if accomplished while the Brits go back to imperial measurements?

The picture above is how I like to visualize myself and my wardrobe present day, but alas, to achieve that image I would have to liposuction 30+ pounds from around my middle...and that's just gotta hurt...and grow out my hair considerably! LOL.

They look like a couple of yeoman farmers on their way to market. Though why the chap in the cap is wearing such a short waistcoat is a puzzle.

Yesterday, in the mail (the paper kind), a catalogue from Todd Synder showed up. I was maybe aware that a brand by that name existed, but I had no idea what it was and had certainly never bought anything from it nor signed up for its catalogue. I guess it bought my name and address from some list.

Anywho, I only half looked through it as I was standing in the kitchen talking with my girlfriend, but I did see this kinda Tweed coat, I guess.

It's interesting that the description uses the terms "Balmacaan," "Donegal" and "twill," but not "Tweed." Considering (as we learned earlier in this thread) that "Donegal Tweed" is not a legally protected name (hence, get close to something wooly, scratchy and with flecks of color and you're good to go), I'm surprised Todd Snyder didn't use the term "Tweed."

But then, who knows what its marketing / target demographic says / thinks about the word "Tweed." Maybe "twill" sells better or maybe it felt "twill" more accurately described the weave.

Description from the website: The Balmacaan [pronounced bal-MA-can] takes its name from the Scottish estate near Inverness where this style was reportedly first seen in the 19th Century. The key attributes are raglan sleeves (unstructured), a fly-button front, a Prussian collar (it resembles a men’s shirt more than a suit lapel) and a slightly slouchy fit. There’s nothing slouchy about the fabrication, though: The Donegal patterned cloth is made from Italian virgin wool for a luxurious hand feel and genuine horn buttons.

This came in email from Polo yesterday titled "Tweed Season"

The Ivy Cap, the crew neck sweater and those classic Persol Glasses...perfect! You should cross post that handsome gentleman to the "What Are You Wearing Today" thread.

And a beagle is a perfect accessory.

Oldsarge said:
And a beagle is a perfect accessory.
Click to expand...

Agreed and what a handsome little fella he is.

A Balmacaan from a Drapers fabric. Mr. Pink from styfo commissioned this one from Hemrajani. 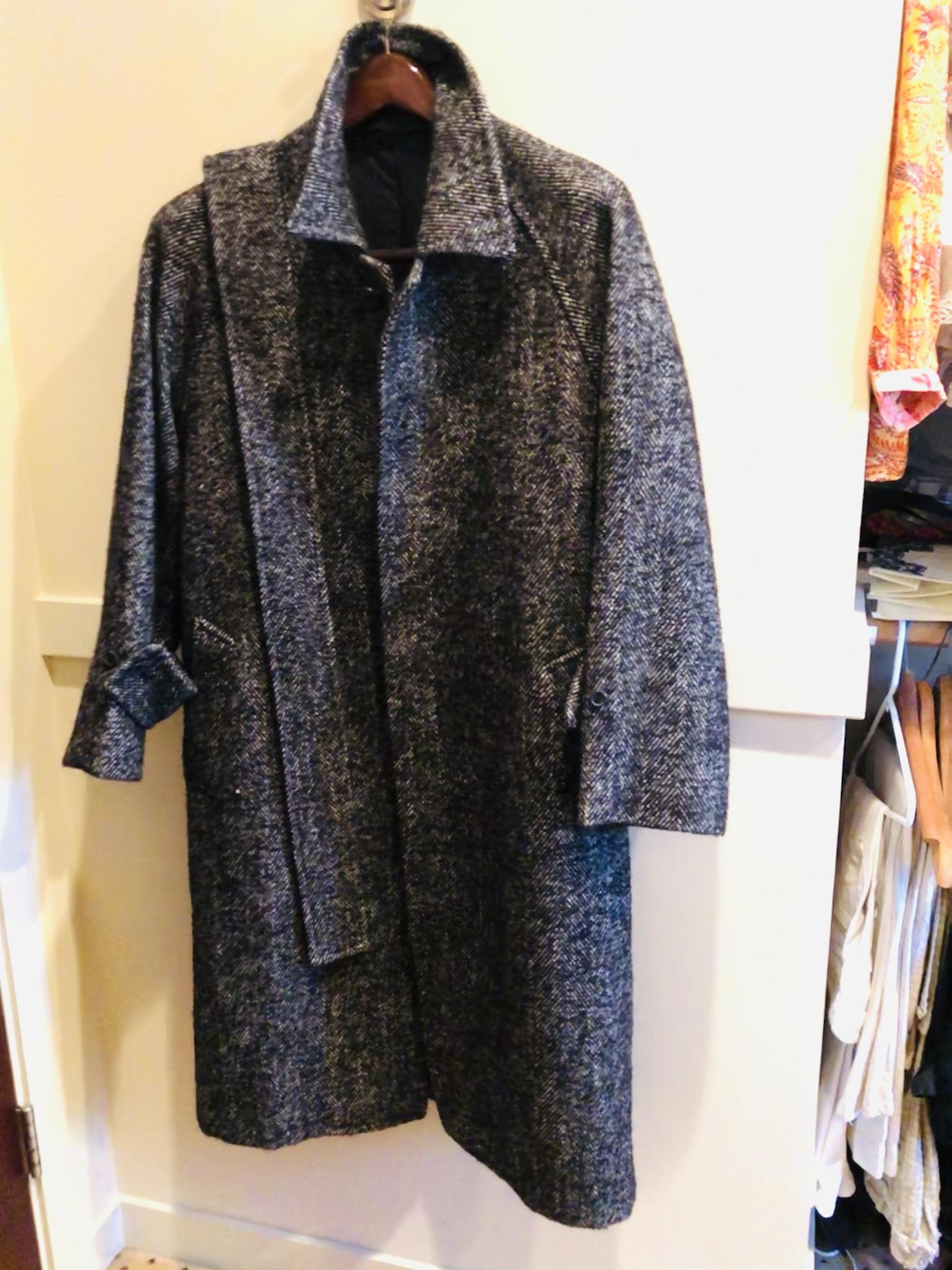 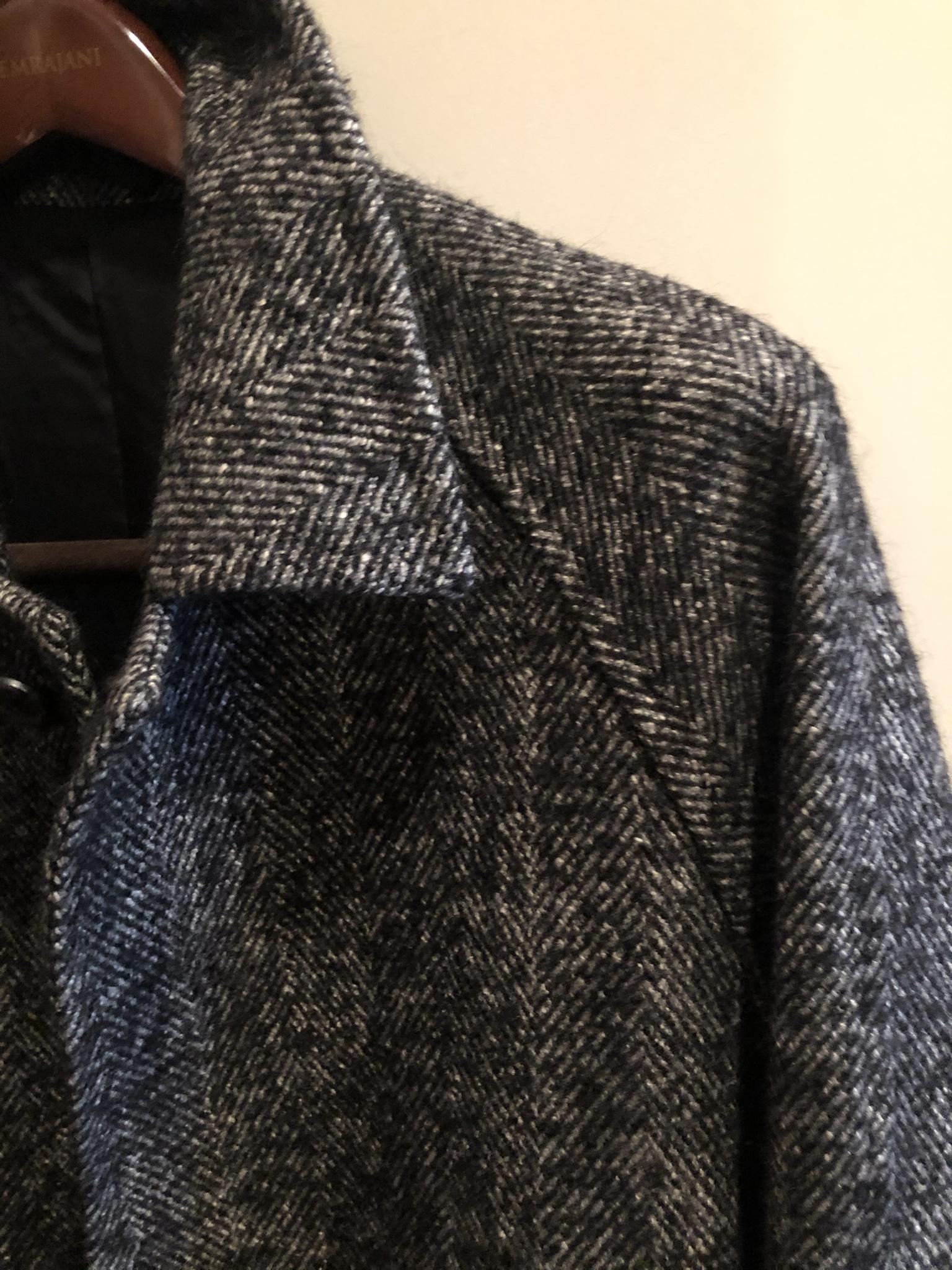 I love the jacket and it works Ok with the blue jeans, and that black knit polo shirt could have worked if the gentleman had just not buttoned that top button. That looks so dorky, I say as I serruptisciously unbutton the first button on this day's vented fishing shirt! LOL!

And this to go with it.