Why would a fake advertise the fact? why make a coat that looks like a Burberry and then add a label that would make it a fake, if Burberrys weren't made in Poland.

Chouan said:
Why would a fake advertise the fact? why make a coat that looks like a Burberry and then add a label that would make it a fake, if Burberrys weren't made in Poland.
Click to expand...

While some Burberry items, namely the classic trench coats, are still made in England, there's much that's made in Eastern Europe not to mention China.

This is especially true with the "Brit" line. The fact that something is made in Poland wouldn't necessarily disqualify it as being genuine.

Personally, if I could choose, I'd opt for a Burberry or Aquascutum made in England or Canada. Not China or Eastern Europe.

I know some of the trenches from the "London" line are made in England. I'm not familiar enough with them to know which models of course.

Bill's in Bangladesh and Barbours in Lithuania too.

Reuben said:
Bill's in Bangladesh and Barbours in Lithuania too.
Click to expand...

Very true. I do believe that Aquascutum is back under British ownership now, though. At least there's that. I think the Chinese company that owned it bought it for less than $25 million. lol

WillBarrett said:
Any help with this? No label but curious about the pattern. 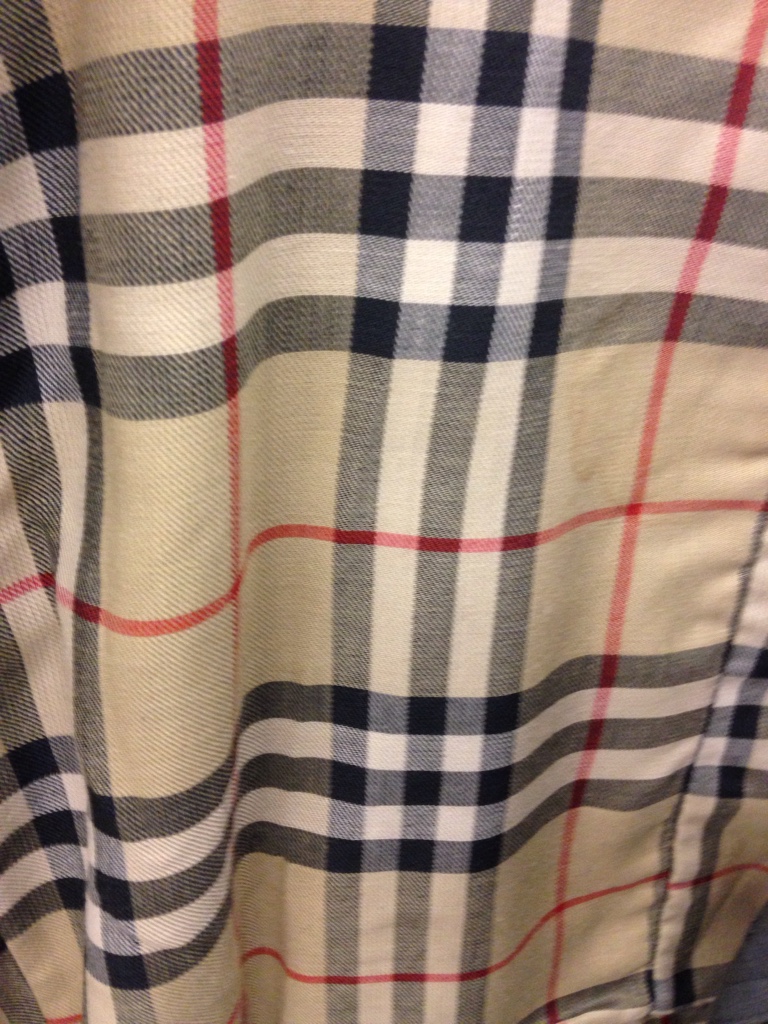 Sent from my iPhone using Tapatalk
Click to expand...

Please help with this coat I just found at a Thrift store-fake or not?

Did they ever make a short black insulated Brit jacket with just a black and white pattern for the lining? Buttons, stitching and labels appear authentic. Thank you
Last edited by a moderator: Sep 24, 2020

Angela Bailey said:
Please help with this coat I just found at a Thrift store-fake or not?
Click to expand...

How much does it cost at the thrift store? If it's like $40 or something, who cares if it's genuine, it's a nice looking coat!
G

I hear you. However, Poland has good quality control, better than UK probably, China, on the other hand....
R

I picked up a used trench coat with a faded lining, Burberry style. Only tag was a 'Made in Poland'.
D

I think the fundamental issue here is a kind of discomfort one feels about certain very traditional brands of clothing, like those that have long been made by Burberry or Barbour or Grenfells in the UK, and comparable brands in the USA, now being outsourced to other countries which may not have a history of excellence (at least none that we know of) in the manufacture of clothing. I am definitely not discounting the widespread production of fakes. That is certainly a problem that we have to face. So the question is: Are we looking at a real Burberry (or Barbour, etc.) made in another country, outsourced legitimately, or are we looking at a fake product that is counterfeited illegally?

In the first case, the only real way to deal with the quality of legitimately outsourced items is to try them and see how well they hold up to long wear. We could gather information, collect others' experiences with such products, and come to a decision on our own. If another country, to which Burberry has legally outsourced manufacture, can actually sustain production of high quality items, then we can trust that country's Burberry items. However, they may still not have the same cachet as those made in the UK.

There are also countries with a general tradition of quality which we might trust more than a less well-known producer of clothing. A good example is Italy. Would a Burberry made in Italy, with its long-standing reputation in the design of practically everything including clothes, be more acceptable to us than one made in Poland (or Bulgaria, Macedonia, etc.)?

A low-cost way of testing such "outsourced" items would be to buy them used in thrift shops and try them out -- see how well they hold up over time. I have a couple of pairs of outsourced shoes made in Indonesia, thrifted at low cost, which I plan to wear this summer to see how well they hold up and how comfortable they are. They look good, and what wear they have seems to indicate quality. If they don't stand up to muster over several months, I will have learned something and my cost for this lesson would have been only a few dollars per pair.

In the second case, the resolution of fakes/forgeries is problematic. How can we determine this (the concern raised in many of the posts above) and if so, how acceptable is it? If a fake item is done extremely well, and holds up to long wear, should we countenance its continuing purchase? This is a tough question to answer in general terms.

A side note: In one of my areas of collecting, philately, the acquisition of forgeries and fakes is considered a very valuable aspect of the whole enterprise, partly because it enables us to study the forgeries and learn how to tell real stamps from forged ones, and real cancels from forged ones. Even common stamps are forged -- not for collectors, but for large-scale bulk mailers who can buy the forged stamps in bulk at 70%-80% of what they would pay at the Post Office. Both the American Philatelic Research Library and the Royal Philatelic Society of London have excellent collections of forgeries that they maintain (I have access to both organizations), in order to help expertize and validate (or not validate) any given stamp a collector submits to them. This is useful stuff!
Last edited: Feb 24, 2021
G

This is so sad to see people know nothing about the quality of Polish production. Poland was a textile empire in past, the area of the city od Łódź, especially.

Best quality Wrangler items now are those made in Poland. Poland also still „
''produces” the best quality of goose down with matchless technical parameters used by top brands from US, Japan and Poland (yes, they also settled famous mountaineering brands like legendary Yeti, Pajak and Malachowski that have been a longtime top suppliers for International expeditions equipping them with extremely endurable sleeping bags, padded jackets and suits).

Poland is also famous from producing raw linen, traditional linen, handmade embroidered tablecloths (being sold expensively in some areas in US), and niche, handmade painted silk exclusively manufactured in Milanówek.
Last edited by a moderator: May 30, 2021