I figure that since tweed has a big part in the look, (Trousers and hats can be imported directly, but I imagine that to get that natural shoulder look, you'd need to have jackets tailored here out of imported fabric.) it might be worth looking into the differences between tweeds of various regions.


Tweed from the Isle of Man. Laxey Woolen Mills has been mentioned here before as a supplier, (Supposedly the last!) although they don't list any examples on their website. Fowlescombe offers the Manx tweed pictured above. I'm not sure I can identify what it is about it that makes it "Manx" though. Is it just the region it was made in, or are there any special stylistic characteristics?


(A Derby tweed sold by someone called Stamford Clothiers)

H. Johnson over at the Fedora Lounge has this to say about Derby tweed:

Derby tweed is woven from a hard, tightly spun woolen yarn (from the local hill sheep) and usually has a tight weave with an even twill (although I have seen herringbone tweed woven in the area). It is similar in weight to keepers' tweed (or slightly lighter) and is somewhat 'slubby' (although not to the same extent as Donegal tweed).

Typical Derby tweed is usually in grey, Lovatt or forest green with flecks of contrasting colour in the weave. Its most distinuishing characteristic is its parallel weft lines of contrasting colour of red and blue (or green, depending on the body colour). Less often, the warp and weft is contrasted in a sort of window-pane check.
Click to expand...

Supposedly now Derby tweed is known for it's penchant for using wool blends.

From Bookster Tweed's extensive . Can anyone shed any light on this? Stylistic characteristics? Here's the website for the , supposedly the last left there. Were there others at one time? 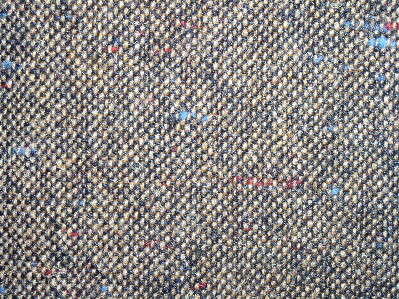 Magee is the big producer. Any others? Characteristics?

From the Fall 1934 Apparel Arts, courtesy of over at the London Lounge:

After an eclipse of more than a decade, a revival of exceeding interest is the Irish nubbed Donegal tweed. This fabric with its characteristic colored flecks and its rough surface still carries the hallmark of its home spun origin. Heretofore, Irish Donegals have appeared in the customary basket weave, but many of them are now being executed in the new herringbone patterns.
Click to expand...

In another London Lounge thread, dropped by to say this:

Donegal is a type of tweed that originated in Ireland. So far as I know, there is no association or protector of the name. Thus Donegal these days refers more to a type of cloth than to any origin. It is a kind of large scale woolen birdseye, often with a dull ground buit with smallish flecks of brlght colors woven in. It is typically denser and tighter than Harris Tweed. [. . .] Donegal does refer to a type of weave. It is much tighter and "harder" than Shetland, and typically denser and a bit thinner than Harris (which is really thick and heavy stuff). The classic Donegal pattern is a sort of birdseye. But there are other patterns. Just as most would (I think) say that the classic Harris Tweed pattern is a herringbone, but there are other patterns as well.
Click to expand...

Any clues on this style? Supposedly Abraham Moon makes it, but what are the characteristics? (Any pictures?) Other makers? Circa 1920 it was apparently shorthand for imitation tweed made out of a recycled wool and cotton blend. Is that right?

Usually softer than Harris (according to Chipp favorite ) and more expensive (forum favorite ). But what about style characteristics? Makers? Hunters of Brora was a big one, supposedly, but they no longer exist. Johnston's of Elgin says , though.


The famous one. Hand-woven (Always? Or was it once also machine-woven?), certified (circa 1909) and protected by an . Supposedly there are 3 mills left that have the blessings of the Harris Tweed Authority: Harris Tweed Hebrides, Harris Tweed Scotland Limited, and . But what are the style characteristics? Herringbone as standard, I suppose. Anything else? Are there any "non-certified" mills in the area?

Any other regions that have been overlooked? (Saxony, maybe?) Any mistakes so far? I honestly don't know anything about tweed, which is why I thought a discussion might be helpful.

Any thoughts or info would be greatly appreciated.
Last edited: Jun 11, 2010

Not much help for you overall, but here's my Manx tweed jacket (by Racquet Club)(pic is from last winter). Other than being from the Isle of Man, the tweed itself doesn't seem to have anything special about it. Softer than a Harris and closer to a Donegal as far as "feel" is concerned. Not really one of my favorites and I'll probably send it to the thrift store in the fall.

I am not a tweed expert. I have a Harris Tweed which I enjoy, but my next Tweed will be something lighter. I will use this thread as a resource.

For a lighter-weight tweed similar to Harris I recommend Breanish, although this isn't a regional tweed but a trade-name. It's made from shetland, cashmere, and similar lighter-weight cloths in the Hebrides, and in my experience is very high quality.

Derby tweed used to be very good, and it's still a very durable material. Unfortuantely, current Derby tweed is often a wool blend (with as little as 60% wool included), and while it is durable and tough it rapidly pills and looks rather poor. Good for working field clothes, perhaps (although you relaly should go for Keeper's tweed here), but not something I'd recommend.

a case of tweed

Proud of my piercing analysis, I threw my feet onto his red velvet, tassled footrest and drew on my favourite Peterson. "Argue with that if you can!" I challenged him, blowing a smoke ring in his direction. He set down his fiddle and stared at me in silence.

"Admit it, Holmes," I insisted. "My analysis is without flaw."

"Three piece tweeds, Border Tweeds at that, a stooped right shoulder from years of grouse shooting, the monocle, a limp that he could have got in the Relief of Mafeking with the 43rd. And he's meant to be the second son of the Duke of Buccleugh," repeated the great detective.

"Just what I said," I replied as he frowned.

"They are indeed border tweeds, but from the border of China and the Crown Colony of Hong Kong, due to the garish pattern of grayish magnolia blossoms, not a common feature of textiles from the Scots Borders," he began. "The stooped shoulder could come from thirty years of hauling platters of sweet-and-sour pork with wonton soup."

"Monocles are three-and-sixpence on Charing Cross Road, and the limp appears to result from a dogbite obtained while preparing a pooch for the cookpot. Furthermore, I doubt that the Duke of Buccleugh is a Chinaman, and thus unlikely to be his father," the hawkshaw concluded.

I decided to avoid Hangzhou Tweeds in the future.

I thought this was going to be a thread about why Pet/Pantsuit guy is wearing tweeds in Tucson in June. As someone who grew up in Tucson and then lived in Phoenix for 10-years, I can't imagine they are comfortable or even conceive that they are appropriate.

katon said:
Any other regions that have been overlooked?
Click to expand...

Maybe a bit of a technicality, but at one time Lewis tweed was viewed as distinct from Harris tweed. (It seems as though now both sorts of tweed are considered forms of Harris tweed?) What sort of stylistic differences were there? Someone seems to be banking on some sort of difference, at least. Also, here is an interesting article on the history of Harris Tweed by Henry Alan Moisley.

turban1 said:
I decided to avoid Hangzhou Tweeds in the future.
Click to expand...

Although it's far too warm here to be wearing tweeds at the moment. I do quite like the border tweeds from the border of Zhejiang province and Jiangsu province.
C


Bookster made me a three-piece suit in the Islay Carron tweed two years ago. In most respects I've been extremely pleased with it, in particular the cut of the jacket which can't be faulted. The tweed itself is good - I had originally been attracted to Hackett's rather similar Horse and Hound tweed, but the Carron is better in my view, being rather more subtle. It seems quite hard-wearing and hasn't turned shapeless or saggy the way some Harris tweeds can. I have to say the trousers are slightly hairy and rough on the legs and took a bit of getting used to, but that's characteristic of most tweeds.
T

re tweed trousers: I get them lined to just above the knee (but not attached on that end).
C

The trousers were lined in that way, but for reasons that now escape me I cut the lining out, so I only have myself to blame.
C

Katon, I don't think you have mentioned West of England tweed, and saxony is a kind of wool (woven in north east Scotland I believe), rather than a tweed region in its own right (the Germans haven't caught on yet).
Last edited: Jun 15, 2010

Centaur, thanks for the info! Would you happen to know which mills produce West of England tweeds? Do they have any traditional style characteristics?
C

I really would like to help - I've worn tweeds for most of my adult life but, rather foolishly, have not devoted time to finding out more about them. My understanding of West of England tweed is that there are (or more likely were) a number of isolated mills in Oxfordshire/Gloucestershire/Wiltshire, in slightly upland sheep areas such as the Windrush valley for example. Hines of Oxford made me a herringbone hacking jacket as a student which was West of England tweed, quite similar to Harris tweed. That eventually expired on a barbed wire fence just east of Stonehenge, then I had a quite different, much denser thornproof keeper tweed jacket for beagling and other blood sports which was also W of E tweed, so it's rather hard to say what really distinguishes W of E from any of the Yorkshire tweeds. Bookster still seem to have stocks of W of E flannel, but that's not tweed (obviously). My preference nowadays is for the Scottish district tweeds - I have a cousin in the Queen's Own Highlanders and I was very impressed to learn that they have their own regimental tweed for mufti.
T

Cent: most interesting, keep it up: I think of tweeds as I do of oriental rugs: some highly local, a "tent" (cottage) industry from a given region, rich with rustic charm, some from big centers, highly sophisticated. Right after I do my tour, by convertible, of the hot springs of America, I plan to move on to the tweed weavers of Britain and Ireland! :icon_smile:
C

Tweed may have enjoyed a small revival in recent years, but it's rumoured that the best tweeds are now available only from the better Savile Row establishments - carefully stored 70 year old bolts of tweed, from long defunct mills.

But visit Islay and Harris, the Highlands and Ireland too by all means. I came across the mill on Islay quite by chance, while on a private tour of whisky distilleries. It's quite a simple place:

If you click on it you can see it more clearly.
T

Yes, a tweed and whiskey tour of places like that! 30 years ago I bought a bolt of a delightful, rustic Donegal in a village somewhere in Conemara, and sealed the deal with a glass of potcheen